Had a wonderful visit to Frankfort, KY. A couple of firsts......

We "camped / parked overnight" in the Frankfort Wal-Mart on Sunday night so we could visit the Buffalo Trace Distillery first thing Monday morning. For those folks "in the know" some Wal-Marts let RV'ers camp overnight in their parking lot. It's a money saver and certainly convenient to run in and grab supplies. Our "virgin" Wal-Mart overnight involved me waking up to the whine of a gas powered leaf blower revving its engine around 1am. Then I recognized the sound of a street sweeper. Being the shrewd engineer I am, I put two and two together (peeked out the window too) and realized they were doing maintenance of their parking lot. I guess I would have chosen the same time if I were  the running the Wal-Mart. I lay in bed for the next several hours listening to this. In the morning I commented to Laura about all the noise the previous night. She looked at me quizzically and said "What noise?".  Note to self on best time to do parking lot maintenance at Wal-Mart and Laura's ability to sleep through the night. 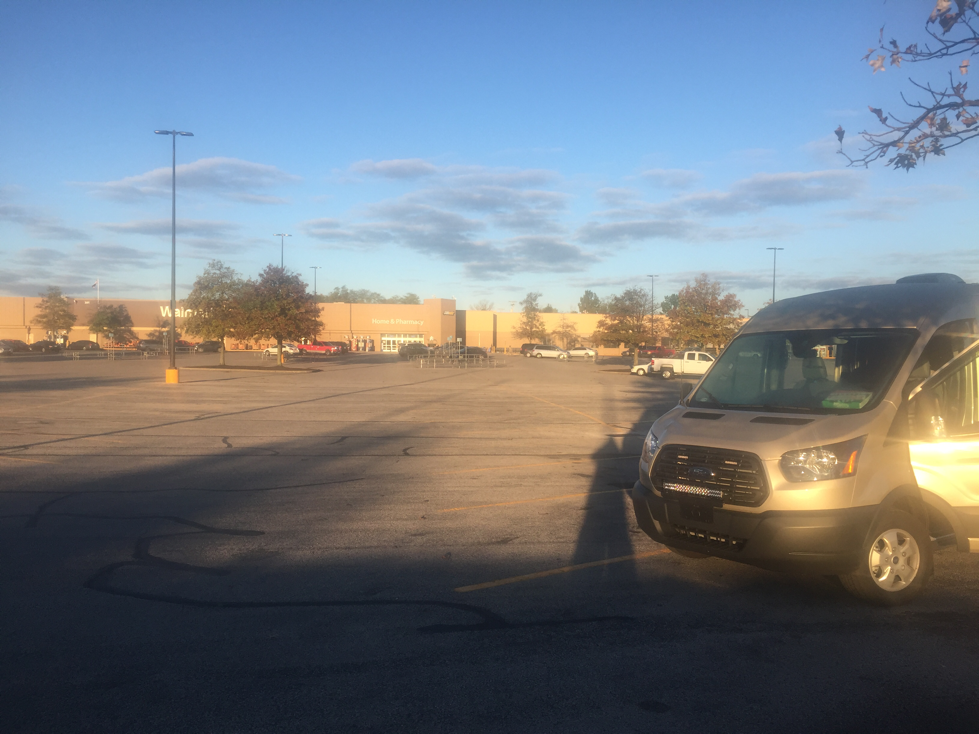 We were FINALLY able to tour the Buffalo Trace Distillery. To me this is the Holy Grail of distilleries. We did a "dry run" by driving to the Buffalo Trace Distillery when we arrived in Frankfort at ~10pm. They have the nicest most helpful security folks at Buffalo Trace (realized they don't get many folks visiting Sunday nights.....). Monday morning is a great time to tour the Distillery as there are not as many visitors as other times (who gets up to tour a Distillery at 9am on Monday morning). They offer multiple tours that are quite informative. If you are ever in the area, it's worth the stop. The day we were there we actually saw them putting up the mash for Pappy's. Only 23 years to go for the "good stuff"....... 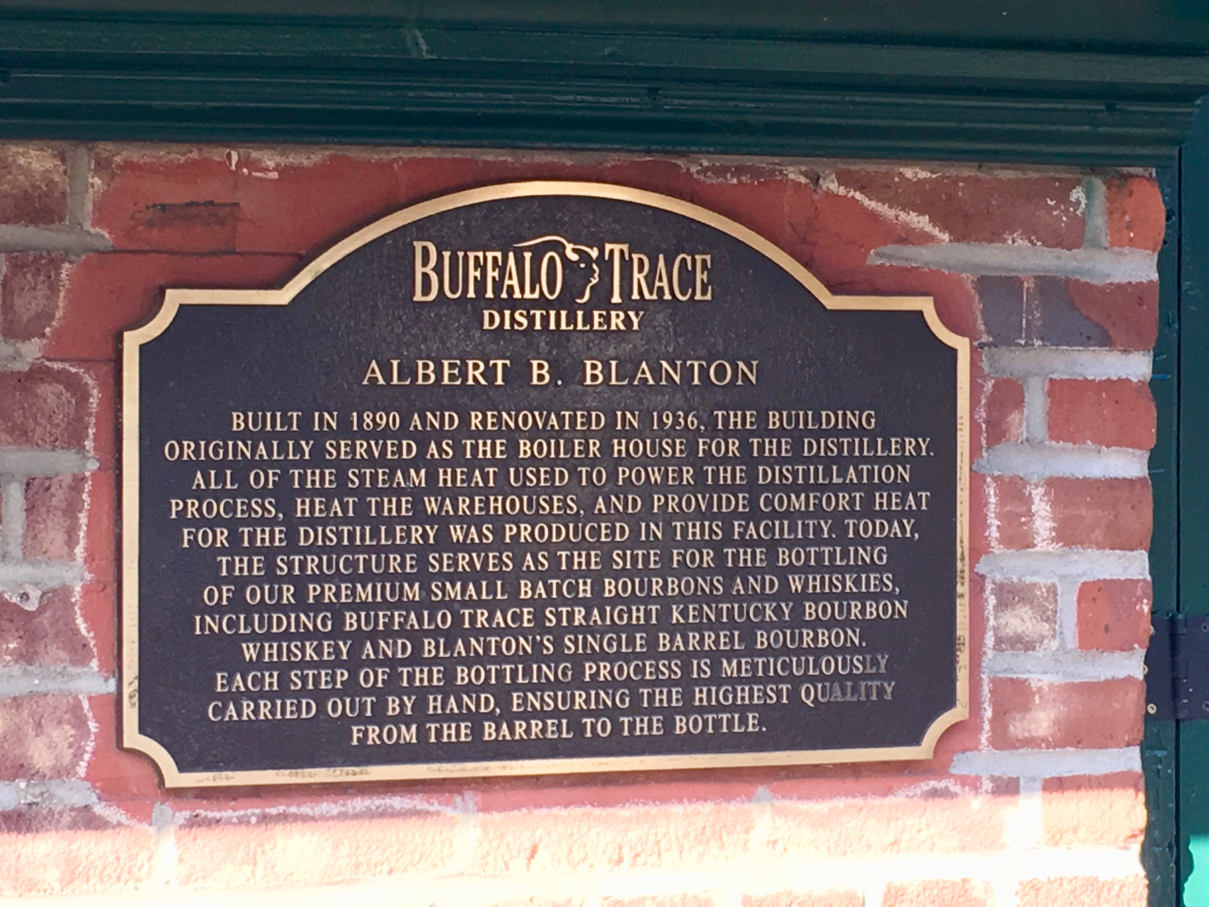 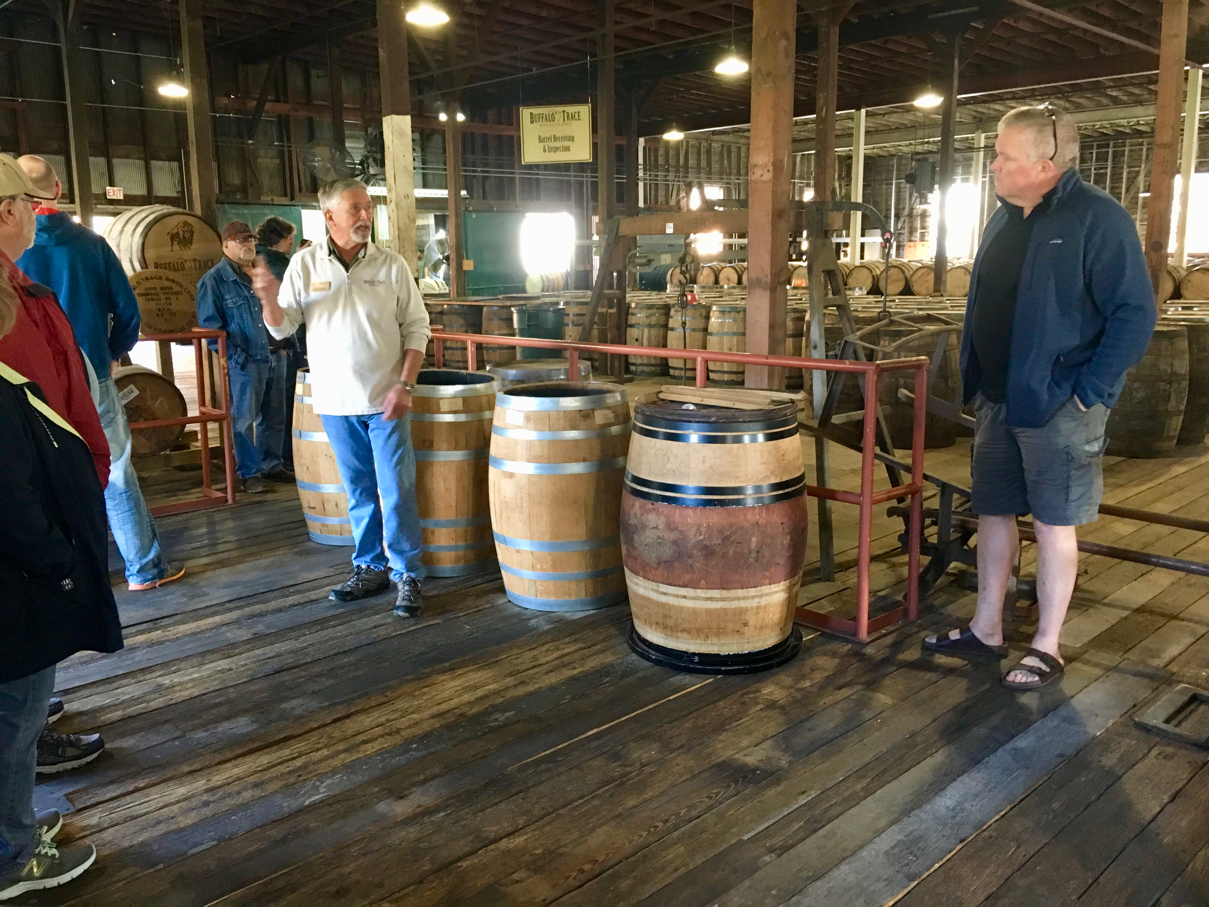 This Gentleman was a former Kentucky State Trooper!  He knew his Bourbon though! 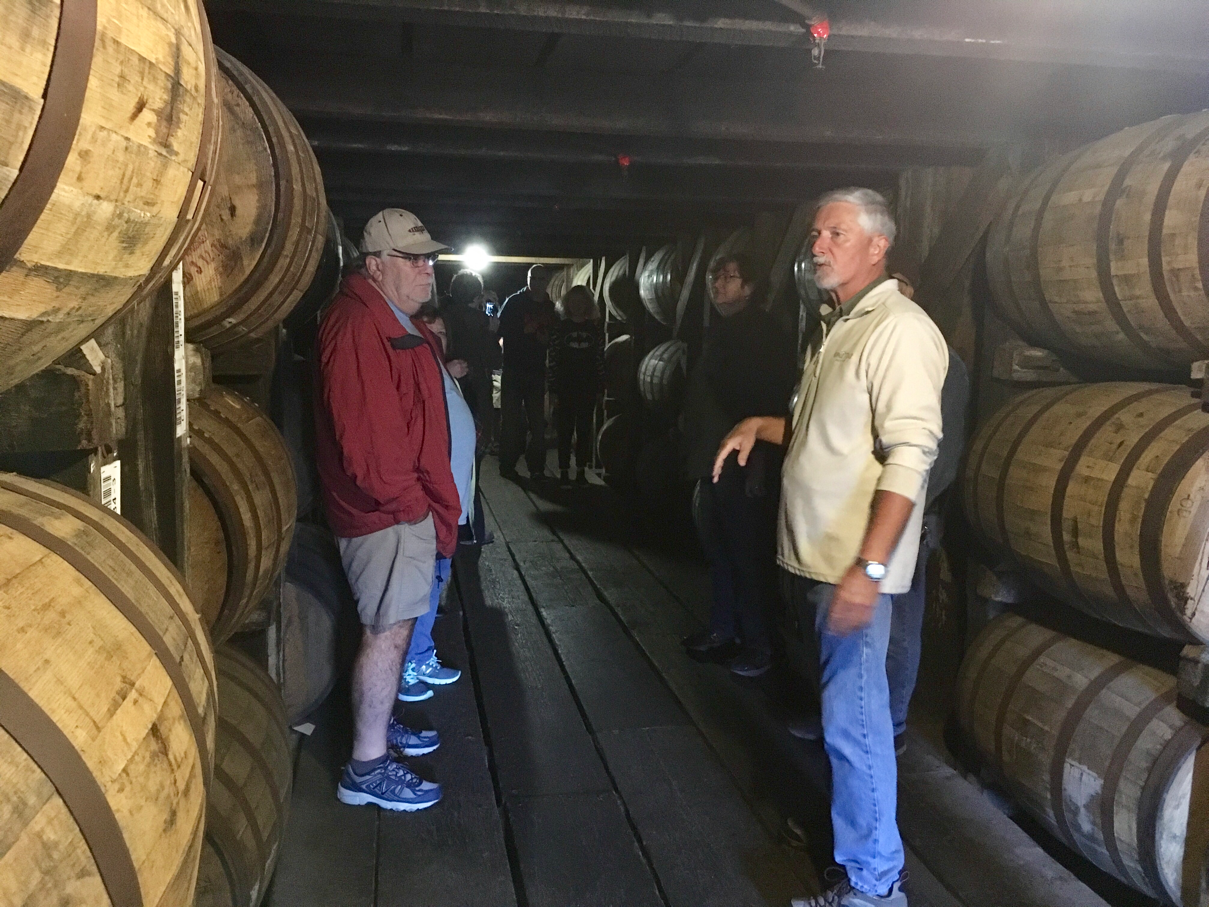 Warehouse and warehouse of bourbon barrels.  What a fragrance! 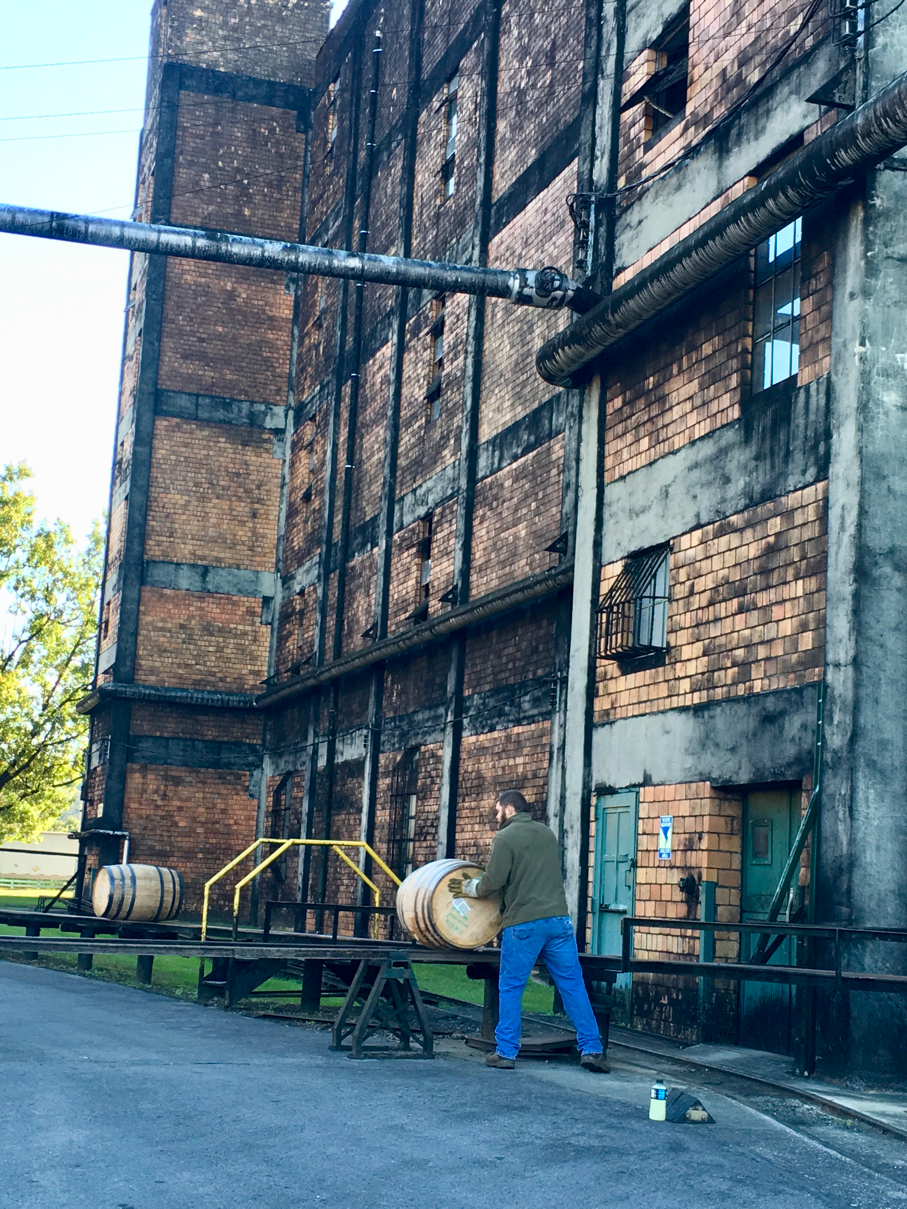 Moving the barrels to the warehouses. A little sampling at the end!  Love that Bourbon Cream.  Look on their web site for a root beer float recipe.  Delicious! 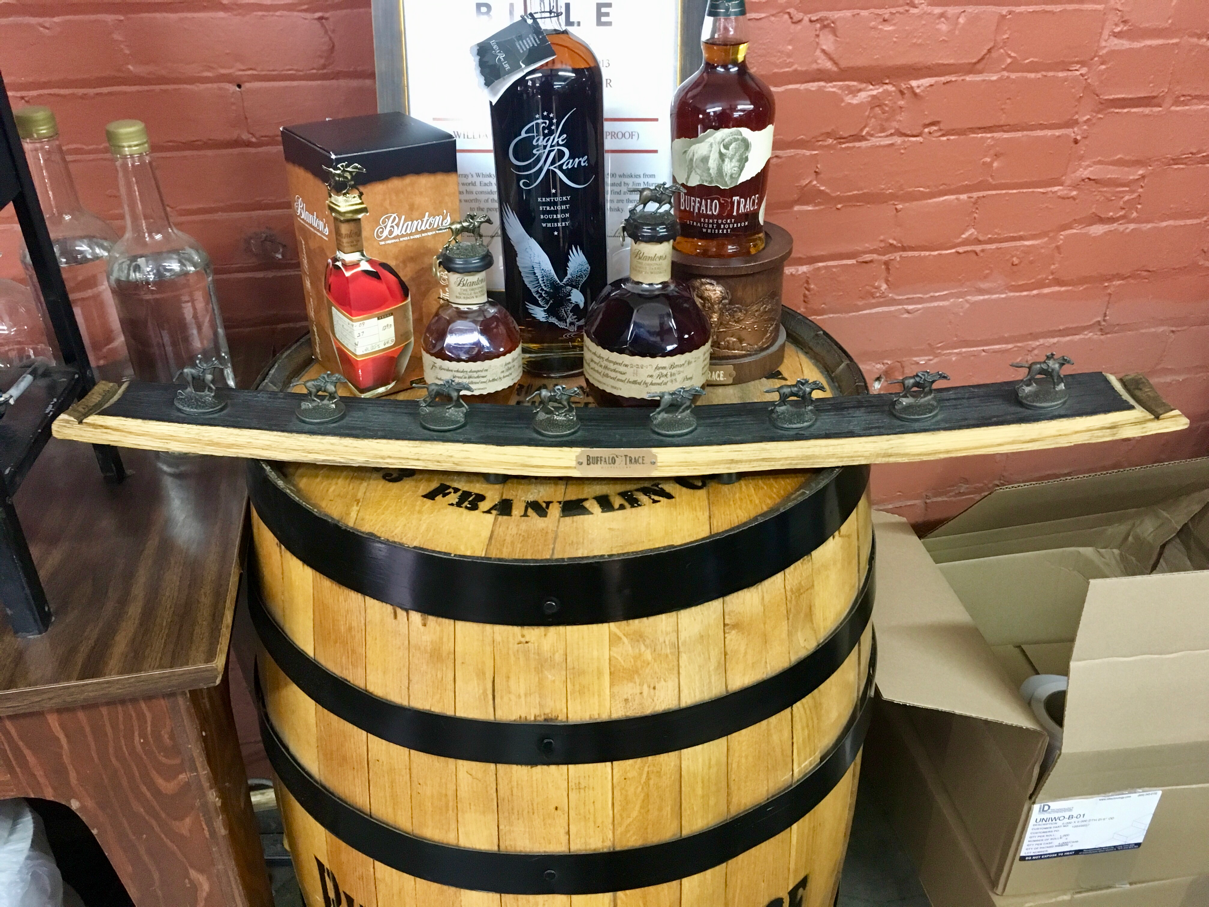 After all these years I did not realize that each cap was different and had a letter on it.  If you
Collected all of them the spelled out B-L-A-N-T-O-N-S.  You could get the caps mounted on a
Barrel stave for a nominal fee. 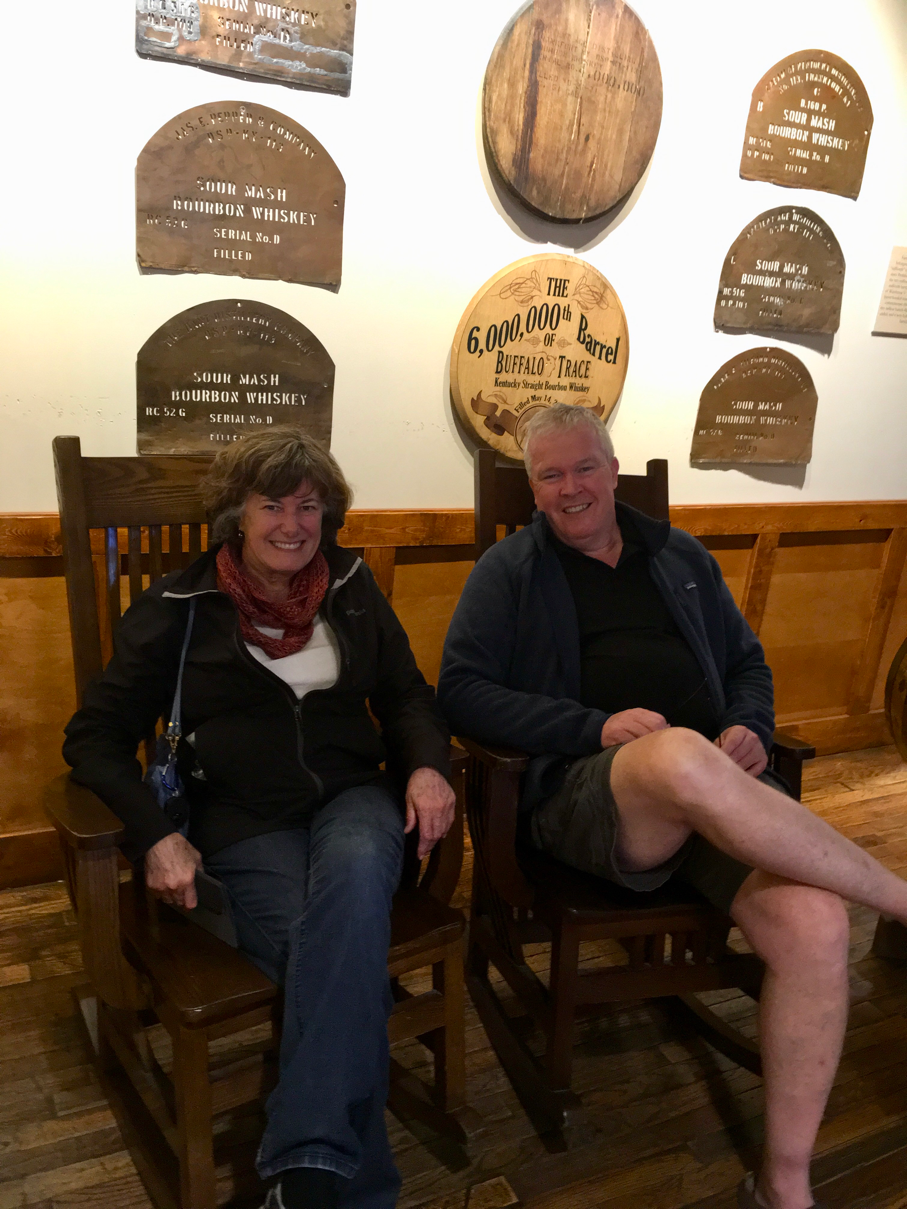 After touring we had to sit a spell!
What a memory!
Posted by The Nomad Retirees at 5:01 PM